Following Jeff Driskel season-ending injury on Saturday against Tennessee, back-up quarterback Tyler Murphy filled in admirably - throwing for 134 yards and one touchdown and rushing for another 84 yards and one touchdown. Murphy competed so well, some may be wondering where did this guy come from. Well, here's the 411 on Mr. Murphy: 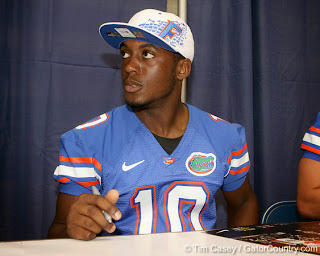 Recruitment
Tyler Murphy originally was Temple's 20th verbal commitment in January 2010. Before quarterbacks coach Scot Loeffler and interim head coach Steve Addazio brought him to Gainesville and made him the Gators 26th commitment for the 2010 season.

Murphy was not a high-profile recruit before the Gators locked on to him. Rivals had him rated as a two-star prospect and the 10th best player in Connecticut where he played for Wethersfield. But Murphy's athleticism and film turned heads. He threw for 1,100 yards with nine TDs and 9 interceptions his senior year, but it was his 1,200 yards rushing and 15 TDs on the ground that made the Gators sit up and take notice. He also returned 9 kickoffs for 316 yards including an 80-yarder.

Prior to the start of 2010 fall practice, Murphy was behind John Brantley, Trey Burton and Jordan Reed and the depth chart,but was described as the most athletic quarterback of the bunch who needed work on his throwing. It was even thought he might be moved to wide receiver because of his athleticism. However Murphy always thought of himself becoming a complete quarterback. In an interview following his signing Murphy said he tries to mirror Tom Brady's mechanics, but said he also has elusiveness, like Michael Vick. Here is some examples of that elusiveness.


Freshman Year - a redshirt is earned
Murphy dressed for all 13 game his freshman year and played a significant role on scout teams while earning a redshirt. The Gators went 8-5 in what turned out to be Urban Meyer's sixth and final season.

Redshirt freshman - new coach and new competition at quarterback
Murphy's second year saw Will Muschamp take over the head coaching position and Charlie Weiss the offensive coordinator spot. The Gators also went out and recruited highly touted Jeff Driskel and equally skilled Jacoby Brissett to back up Brantley during his senior season. Murphy actually played in two games that year, but clearly the Gators were looking as Driskel and Brissett being the future at quarterback, despite Murphy outplaying all quarterbacks in the 2011 spring game.

Sophomore - Driskel and Brissett battle for No. 1
2012 was Murphy's third season with the Gators and his third offensive coordinator as Brent Pease took over for the departed Charlie Weis. In terms of contributions, Murphy was only spoken of as "adding depth" as a solid third-stringer behind Driskel and Brisset. Those two battled it out during fall practice and the first game before Driskel took over permanently.

Fall 2013 - Murphy finally gets some work with the first string
With Brissett's leaving the Gators for greener pastures and hopefully more playing time, Murphy is installed as the No. 2 guy behind Driskel. And with Driskel undergoing an appendectomy, Murphy was able to work with the first team for the first two weeks of fall practice. Apparently the work was enough because the Gator offense ran as efficiently as it has all year when Murphy came in for the injured Driskel today.

Last week the Gators had a bye week, while Tennessee was trounced by Oregon 59-14. Despite Tennessee jumping out of the gate with a 7 point lead, the game was never close. Oregon outscored Tennessee 49-0 in the two middle quarters of the game.

Neither of these teams are anywhere near their best but there have been some very memorable match-ups between the Gators and the Volunteers. The last of these "great games" was probably the 2006 game. The Gators were ranked 7th, while the Vols were number 13. It was a great game with the Gators coming out on top 21-30. Tim Tebow was on the team, but it was Chris Leak who led the Gators to the victory! And for those of you that still claim great defenses win championships, lets not forget the Gators' offense put up 79 points in the SEC and BCS Championship Games.

Another great game between Florida and Tennessee was the 2001 game.Tennessee was struggling at the beginning of the season, but the 9/11 tragedy moved the game to December 1, 2001. In 2001, Florida and Tennessee each came into the game with 9-1 overall records and 6-1 SEC records and the winner was poised to take the SEC title and face Miami for the national title in the Rose Bowl.  Despite the even records, the University of Florida was a clear favorite going into the game, with all the television analyst's going with the orange and blue. This gave the Tennessee team a reason to be  fighting mad and fired up. In the fourth quarter, the Gators led 23-21, but the game was far from over. With Gator fans making the Swamp as loud as possible, tailback Travis Stephens disrespected the crowd by raising his hands to the sky, begging the Florida crowd for more noise. Casey Clausen gained three yards on a naked bootleg to keep the drive alive, and two plays later, Stephens ripped off a 34-yard run to set up a two-yard Jabari Davis touchdown run. With only 1:10 left on the clock, Grossman answered with a 66-yard drive ending in a touchdown. Unfortunately both the two point conversion and the onside kick failed.Gators fans had to endure "Rocky Top" as they filed out of the swamp and as a last jab to the Gators, defensive tackle Albert Haynesworth uttered the final insult "It's The Swamp, I guess,but we made it into a little old pond today."

In 1997 the 3rd ranked Gators faced the 4th ranked Volunteers in Peyton Manning's senior year at Tennessee. He had yet to beat Steve Spurrier and the Gators, and some speculated that he chose to stay and play his senior year for just that reason. Steve Spurrier joked that there another reason: "I know why Peyton wanted to come back for his senior year: He wanted to be a three-time Citrus Bowl MVP!" And Spurrier had previously observed that "You can't spell Citrus without the UT." The Gators were coming off a national championship and the Vols hadn't beat them since 1992. It was a game to be enjoyed by Gator fans with Manning throwing 2 picks, one of them returned by Tony George for a touchdown. The end score was 33-20 in the Gator's favor and the Gators earned the privilege to boast that one of the greatest quarterbacks in both college and professional football could not win against them!

Posted by Mike Arnold at 9:54 AM No comments: 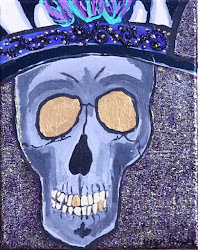